German Christmas Celebrations for all to enjoy!

Highlight of the German Christmas Celebrations

The highlight is Christmas Eve on December 24th, when the “Christkind” comes and brings the presents. The Christkind is a sprite-like angel of sorts, and as children we always were told that we can not see it—and shouldn’t even try—otherwise this special gift-giver wouldn’t bring presents. I pictured the Christkind always as a curly blond-haired figure with wings and a simple white dress with gold borders. In my mind, I could imagine seeing it fly past the window with all the presents in hand. I’m sure I wasn’t the only child with this magical image in my head.

The Christmas tree, which was decorated by my parents on Christmas Eve, was always a big surprise. The tree was set up in the “good stubb” (or front room) and under no circumstance were we allowed to take a peek behind those closed doors. The unveiling was pure magic. Upon entering, the only light in this festive room was from the lit wax candles on the tree. I remember there was a bell hanging on a branch that played Silent Night. Aside from all the presents under the tree, it was clear Christkind had been there. You could just feel it. To me the Christmas Tree always has been the most important part of the German Christmas traditions.

While the children unwrapped presents, my mother prepared the food—always potato salad, some sausages, and bread—a tradition I still keep today. Later on, the Christmas feast consisted of roasted Goose, some red cabbage, and dumplings. I never really liked eating goose, but I did enjoy the goose fat. When the drippings hardened, I would spread it on bread seasoned with salt and pepper.

I hope you have as many wonderful memories of Christmas as I did. _Oma 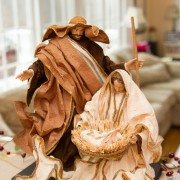 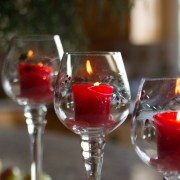 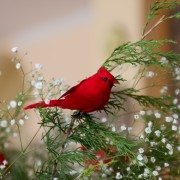 The German Christmas Traditions start with the Advent Calendar and Advent Wreath.

December is a month when I needed to do some concentrated planning to keep up with all the German Christmas celebrations.The advent calendar would countdown the days to Christmas—and the advent wreath would countdown the weeks. Starting on the fourth Sunday before Christmas, a candle would be lit. Each Sunday thereafter, one more candle would be lit until all four were illuminated. Both the calendar and the wreath were special treats for my kids.

Create your own holiday tradition. Here’s how to build an advent calendar out of empty matchboxes. Your children will love it! Click here for instructions.

Barbarazweig—Barbara’s Branch is also part of the German Christmas Celebrations.

Here’s one more of the great German Christmas traditions. On the 4th of December, the feast day of St. Barbara, I cut branches from my cherry tree and put them in water so that they bloom on the 25th of December. I always place tags on the various branches with the names of all the members of the family. The name of the person attached to the first blooming twig will have luck in the following year.

NOTE: If you can’t get a cherry branches, try substituting the shoots of some other blossoming tree or plant. Try: apple, plum, lilac, or forsythia and celebrate Barbarazweig in your own special way.

So who was this Saint Barbara? Legend has it, she was young lady who lived around 300 A.D. in Asia Minor (which is today known as Turkey). Barbara was held in a tower by her pagan father to secure her innocence while he was away. While imprisoned, she converted to Christianity. Not willing to give up her new faith, her father planned her execution. While waiting for her demise, Barbara watered the twig from a cherry branch that grew outside her cell window. She watered it every day. Twenty one days after poor Babara’s beheading, the twig started to bloom. As for her horrible father, well, he was struck dead by lightning immediately after the execution. No wonder some believers pray to St. Barbara during a thunderstorm.

Get ready for one of the German Christmas celebrations with Nikolaus. On the 6th of December, Nikolaustag,  Nikolaus is coming. And German children couldn’t be more excited.

Nikolaus is accompanied by his helper, Knecht Ruprecht. Nikolaus is dressed in red and his sidekick wears brown. Don’t confuse Nikolaus with the other guy in red. Santa and him are two different people with two different stories.

Now, back to the kids. In the evening of the 5th, the children leave their freshly cleaned boots outside the front door. The next morning, amazingly, their boots will be filled with chocolate, goodies, oranges, mandarins, and nuts. Sometimes, Nikolaus will even pay a visit to the families and read out of his big black book.

Throughout Europe, and even in various regions in Germany, there are many Saint Nicks, Sankt Nikolaus or der heilige Nikolaus, which one are you familiar with and what are those traditions? I’d love to know and share those stories.

German Gingerbread the real one. A gift that’s always in good taste.

The original gingerbread also adds to the German Christmas traditions. Even though my children and grandchildren are far away, I still keep the Nikolaus tradition alive and well. Each year, I send a Nikolaus bag filled with goodies for the little ones. And for the bigger ones, I order from a variety of authentic gingerbreads from Germany. Sure, it’s not the same as filling up boots but as they say, it’s the spirit that counts! These gingerbreads are beautifully presented in a historical-themed tin box—making a great gift for family and friends. 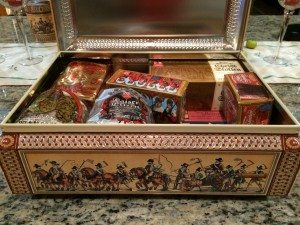 Merry Christmas to you and yours. Blessings, Oma 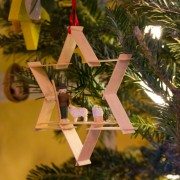 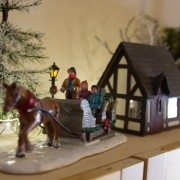 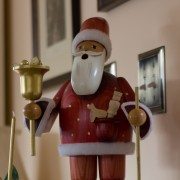 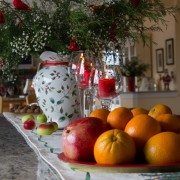