Classic Borscht Recipe –  One of the traditional Ukrainian Meals

The Classic Borscht Recipe consists of a broth enriched with different kinds of vegetables, mainly red beets and white cabbage. Many versions of the soup are available depending on the region and family recipes. Even so, it is not a German dish; it fits very well into the category of our hearty German soups.

After taking a DNA test, which my daughter gave me as a present, the result showed that I am 21% Ukrainian. This reason is good enough for me to make the Borscht and add it to my collection of recipes. So, in fact, I am a balanced mixture of a little from the East, the West, the North, and the South. The explanation lies in the history of revolutions and wars in Europe in the past. Nevertheless, I was surprised by the result, growing up as a German, living like a German, and carrying the German traditions. Genealogy is fascinating, and it might also hold a surprise for you.

Ingredients (net weight after peeling) for the Classic Borscht Recipe:

Preparation of the broth:

Wash the meat under running water. Add 1 teaspoon of salt to the cold water into a pot. Place the meat into the pot and bring it to a boil. Turn the heat down and let it simmer for 1 ½ hours. During the cooking process remove the foam using a skimmer spoon.

After the cooking time, place the meat on a plate to cool down and drain the broth through a sieve. Cut the meat in cubes and place both aside. 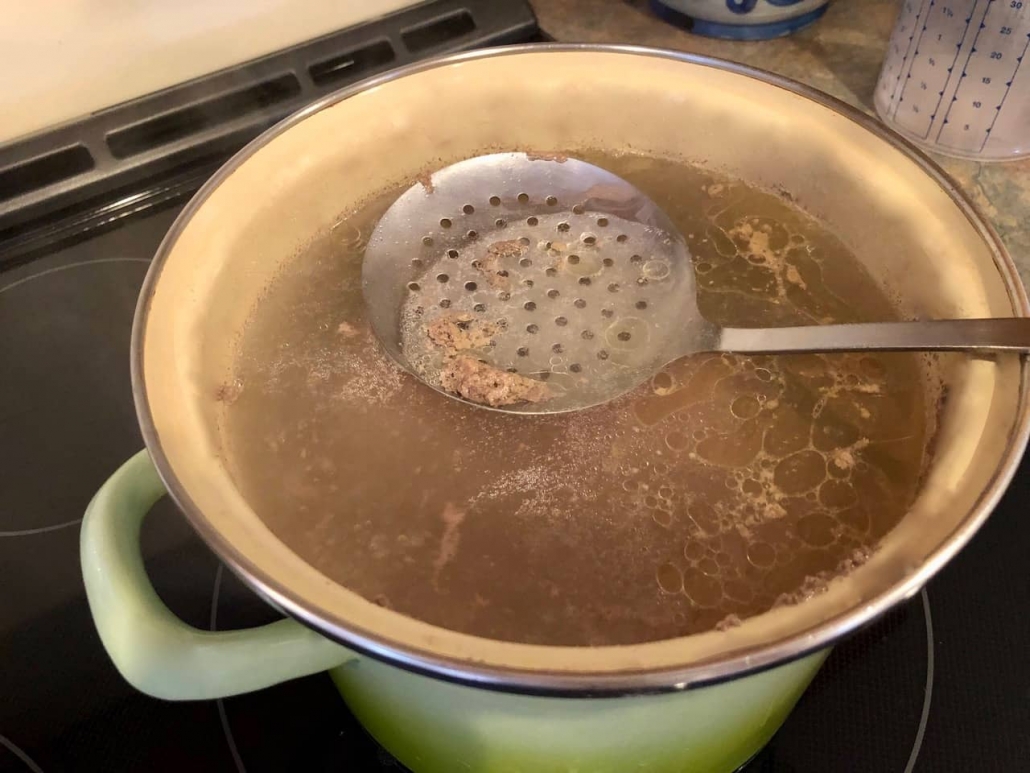 Preparation of the ingredients:

The best way of making the soup, is to wash, peel, and cut the vegetables before as follows. Peel the onion and garlic cloves and cut into small cubes. Wash the chili pepper and bell pepper, take the seeds out and cut into small cubes. Peel the celery root, red beet, and carrots and shred them using the large hole of a box grater. Use gloves to work on the red beet to avoid coloring your hands.

To peel the tomatoes, place them in a bowl. Cover them with hot water for 5 minutes, before removing the core with a corer. Pull the skin off the tomatoes using a paring knife and cut into cubes.

Cut the white cabbage in quarters and cut out the core. Cut small strips with a knife or use a mandolin slicer. Peel the potatoes and cut them into small cubes. 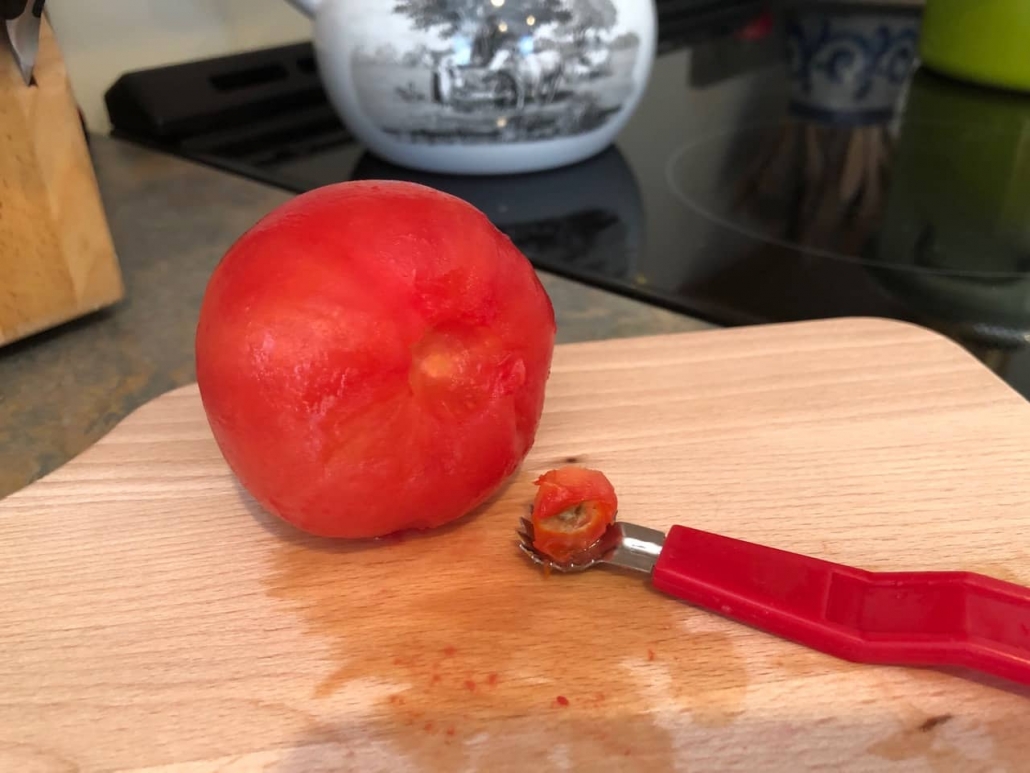 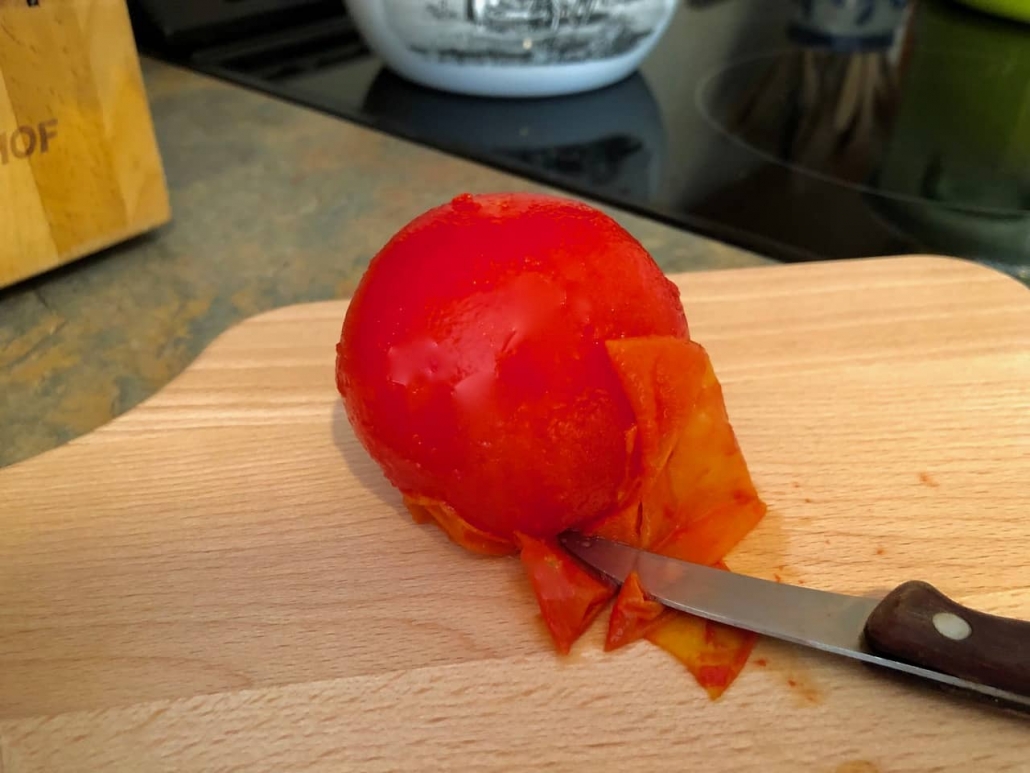 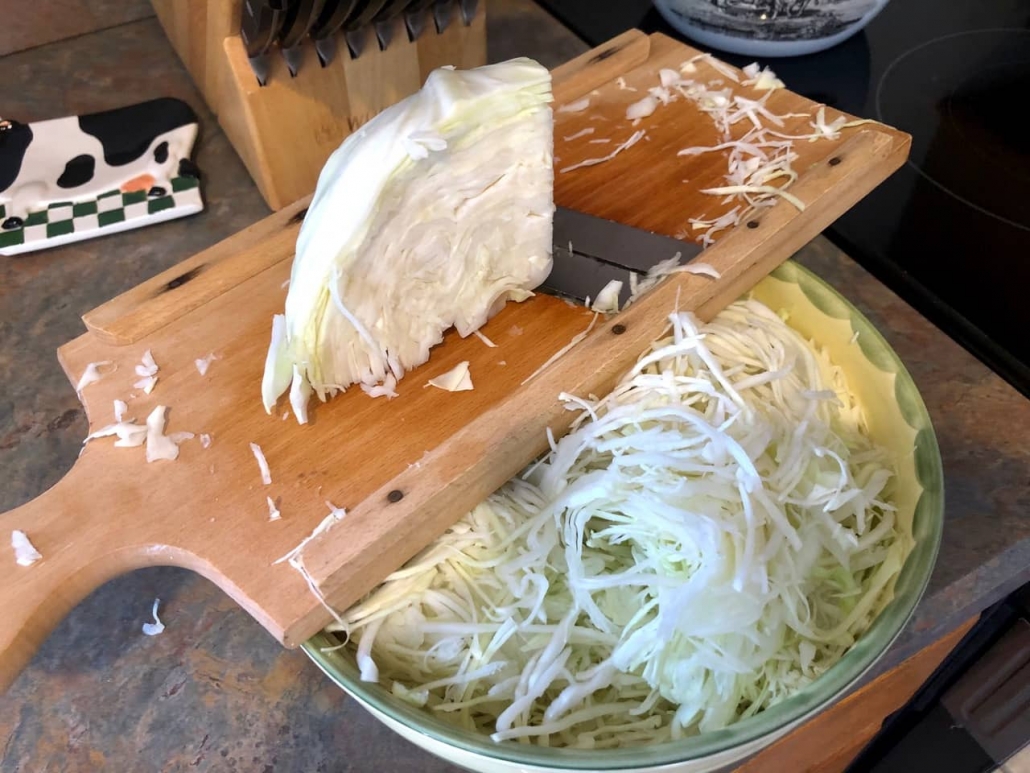 Preparation of the vegetables:

In a large bowl mix the onions, garlic, carrots, bell pepper, chili pepper, celery and red beets. Heat up the oil in a large pan and add the vegetable mixture to it. Fry it for about 3 minutes while constantly stirring. Add the vinegar and tomato paste and stir it into the mixture. Cover the pan, turn the heat down and let it simmer for 20 minutes. Stir from time to time.

Meanwhile, place the bay leaves and 2 teaspoons of salt into the broth and bring it to a boil. If needed add evaporated water. Add the potatoes, white cabbage, and meat cubes to the pot and let it cook for 20 minutes. 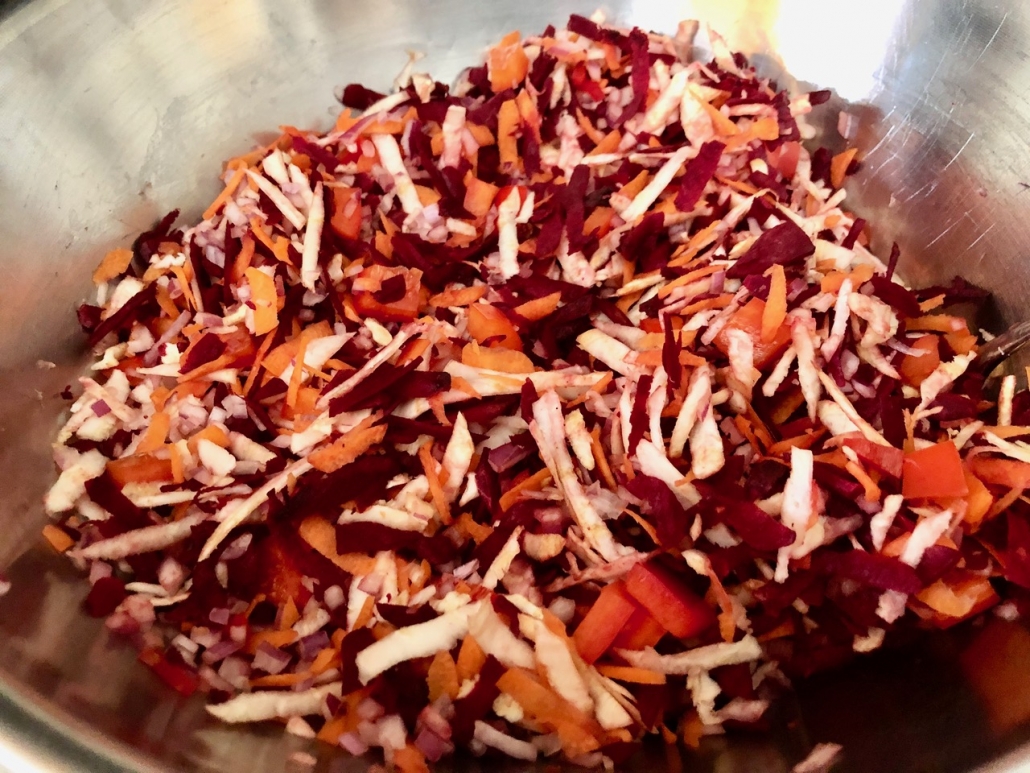 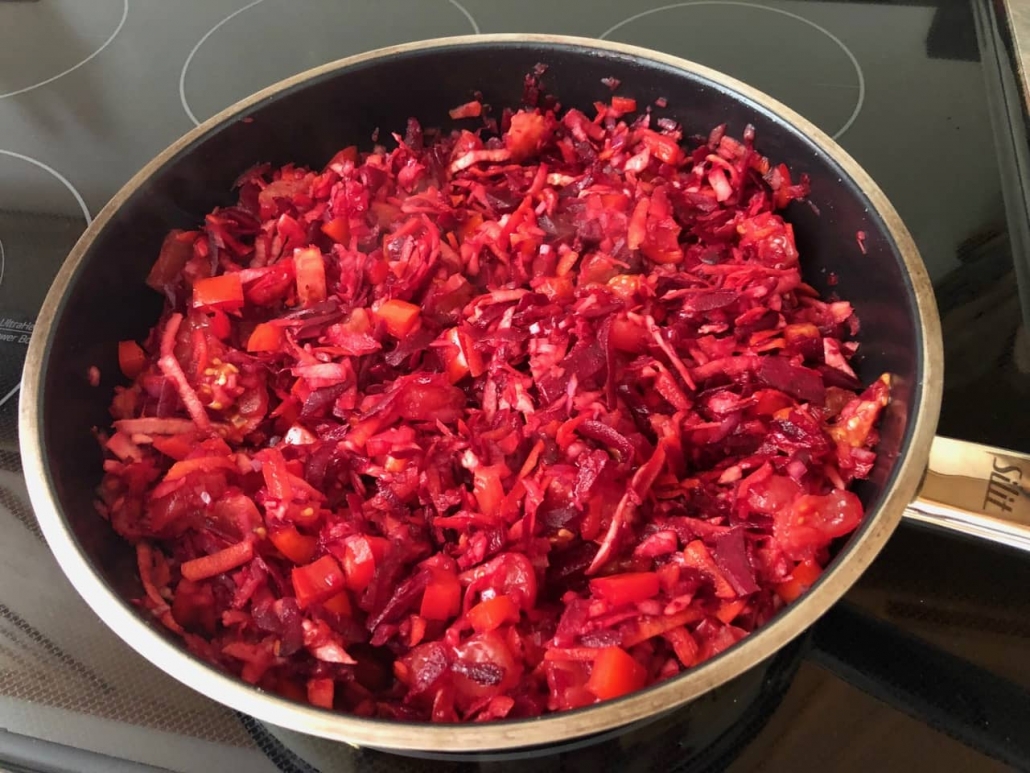 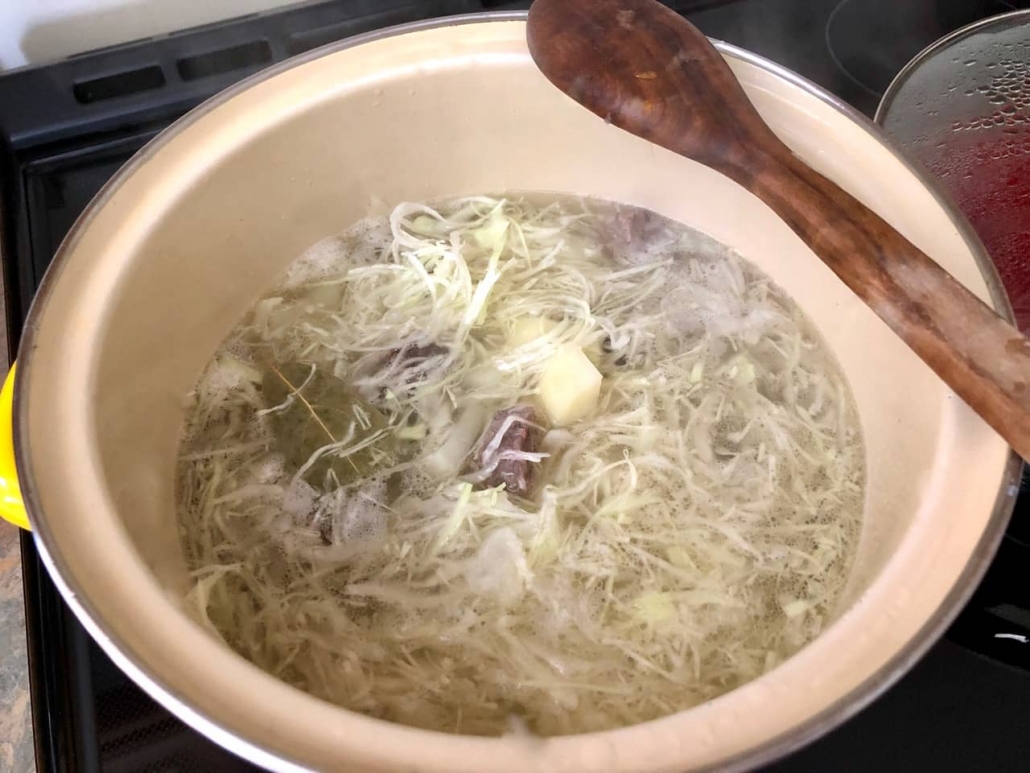 Finishing of the Classic Borscht Recipe:

Add the beet mixture to the broth. Chop the dill and parsley and add it to the soup. Stir it and bring it again to a boil. Spice it with pepper and salt to your taste and turn the heat off. The Borscht is right, if a cooking spoon can stand in the pot. 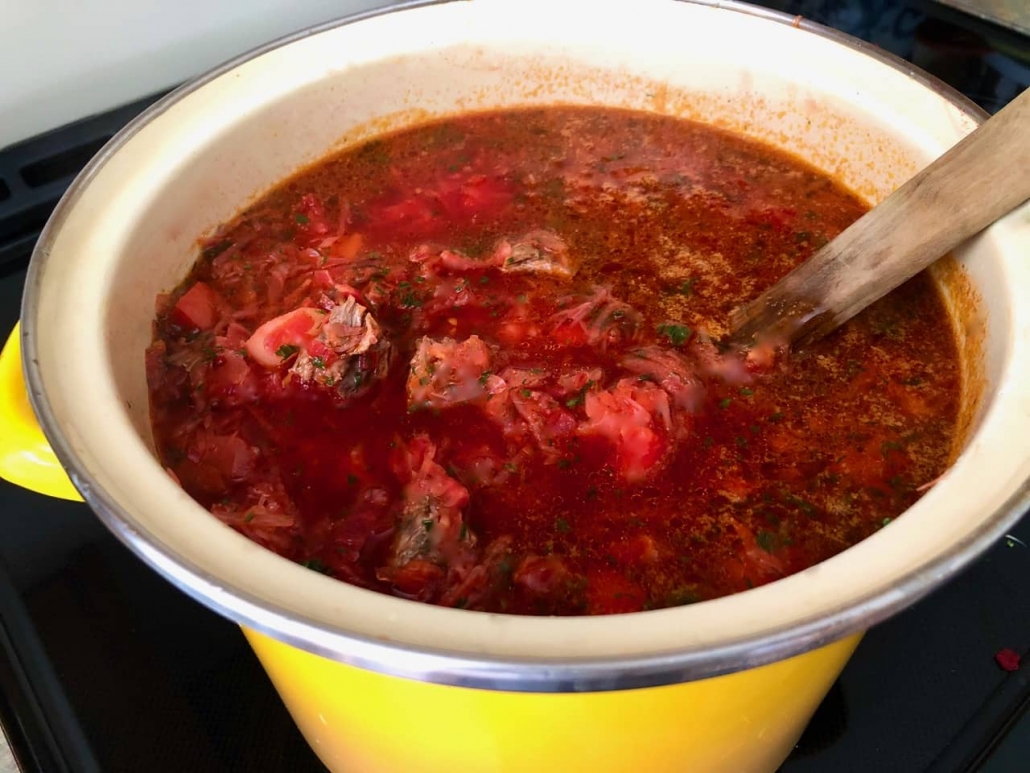 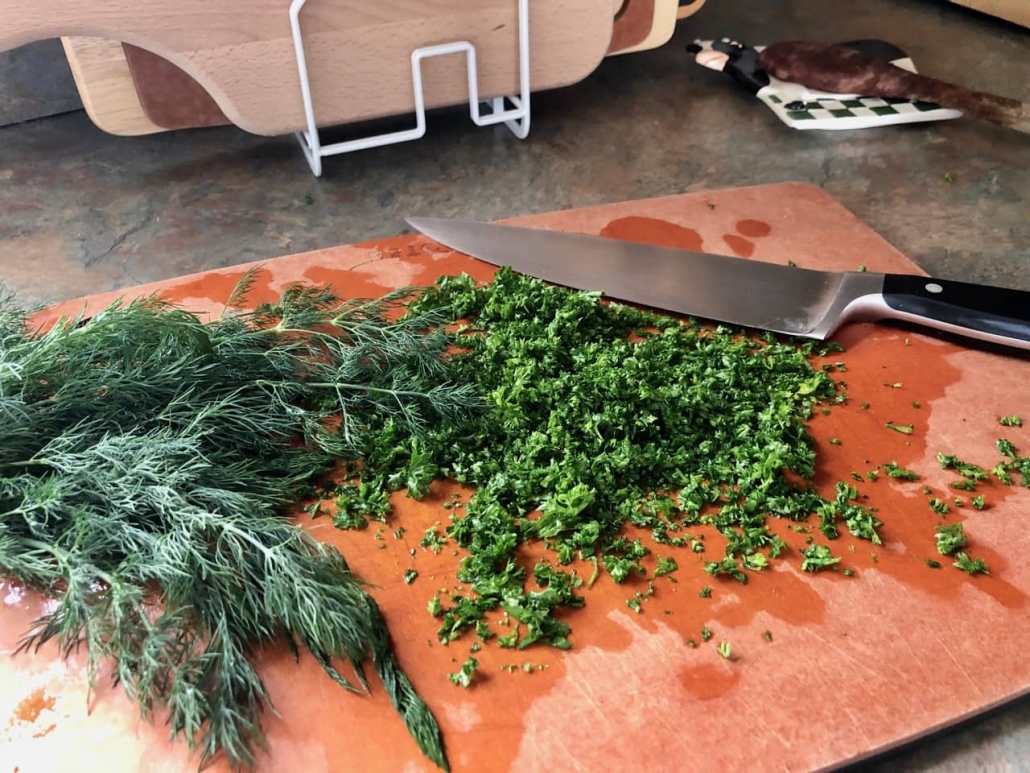 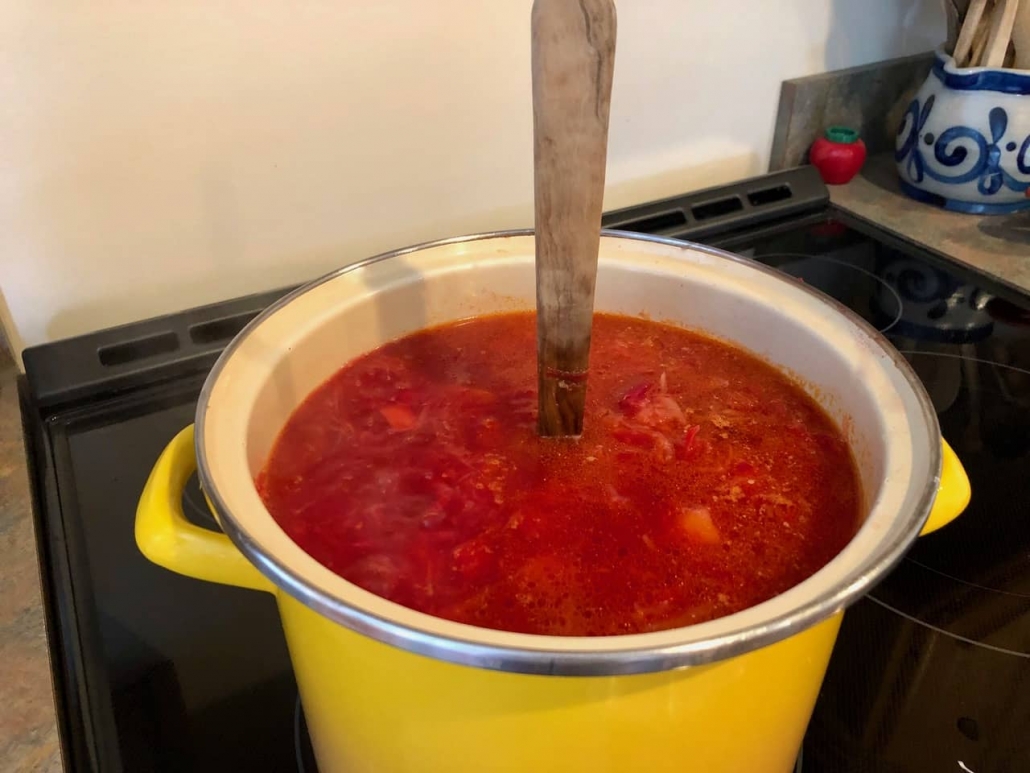 Serve the Borscht with a blob of sour cream and a slice of one of Oma’s homemade breads. The soup tastes better the next day and the color will be more intense.