The German Style Kale Recipe – Grünkohl mit Pinkel is a dish more known in the Northern Part of Germany. The dish is a combination of kale and a variety of sausages and/or meat. Best served with potatoes. Pinkel, Bratwurst, Kielbasa, smoked Andouille sausages, Kassler, smoked ham, smoked pork chops, pork belly, and smoked bacon are a selection of sausages and meat to use.

Preparation of the kale for the recipe:

Wash the kale and remove the thick middle ribs and stems. Bring a large saucepan with water and 1-2 teaspoons of salt onto the stove and heat the water up to a boil. Add the kale to the boiling water and let it cook for 1-2 minutes. Turn the heat off and use a ladle to fill 500 ml of the water in a small saucepan. Place the kale in a colander and rinse under cold water and let it drain. You also could use a salad spinner to dry the kale. Cut the kale into small pieces and place it on the side. 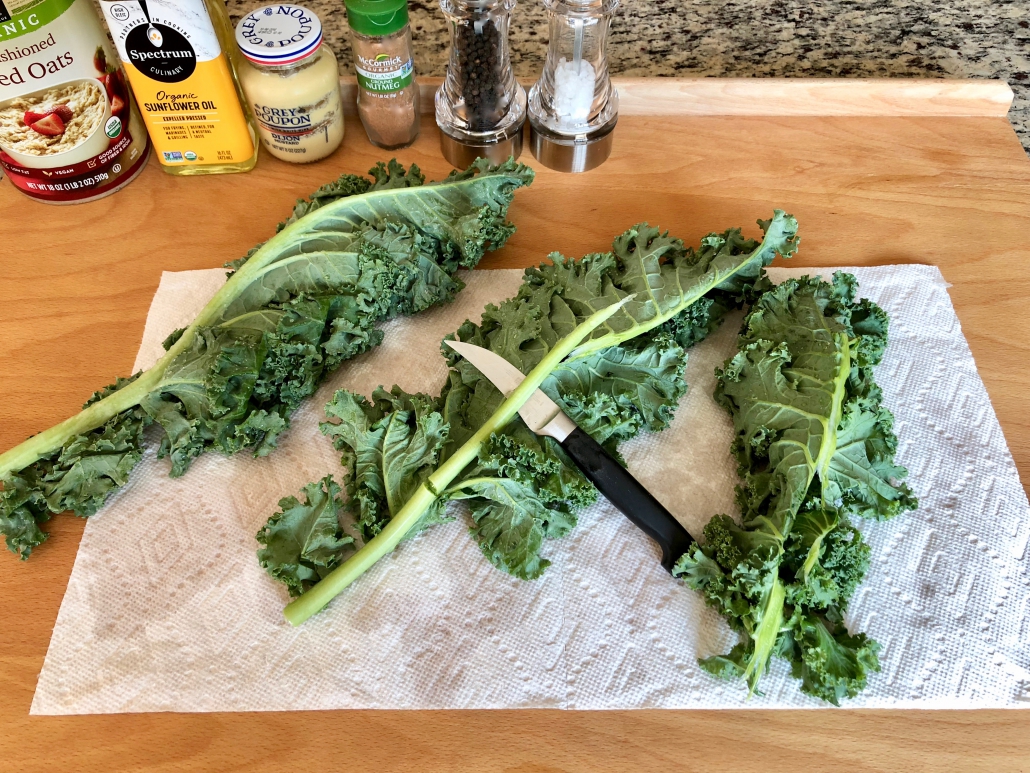 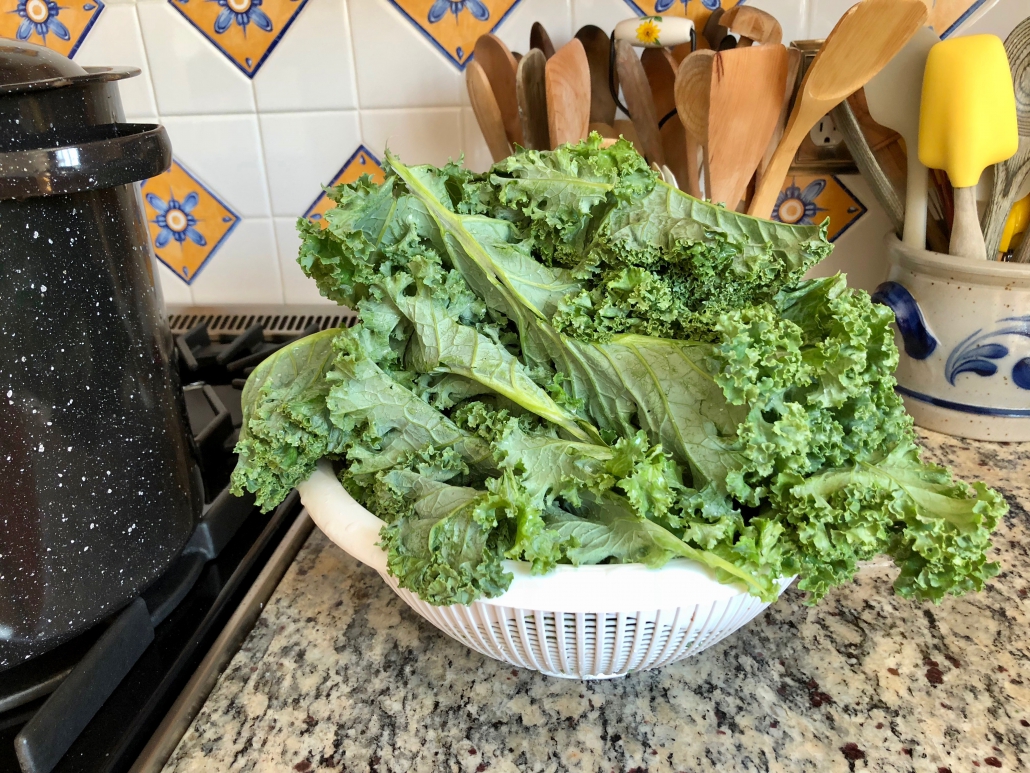 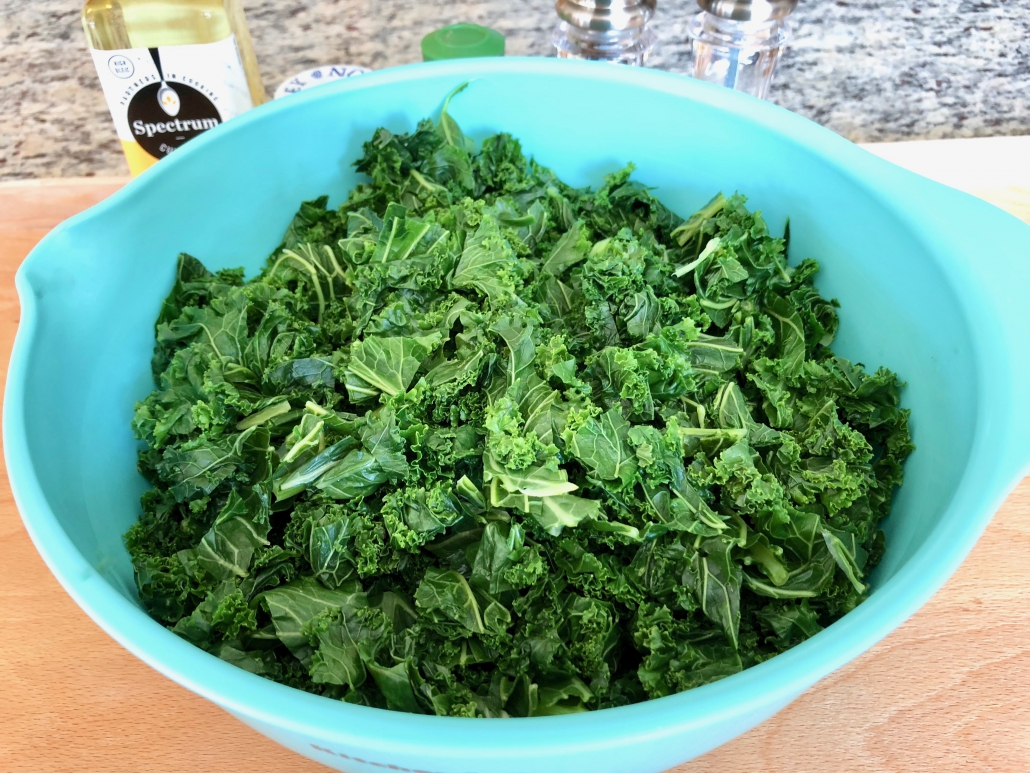 Add the cube of bouillon to the water in the small saucepan and bring it to a boil. Let it cook until the cube is dissolved. Turn the heat off. Cut the bacon in small strips. Peel the onion and dice them with a knife or food chopper.

Heat up the oil and fry the bacon from all sides until slightly brown. Add the diced onions and sauté until translucent. Mix the kale with the onions and bacon using a wooden spoon. Add the bouillon to the kale. Spice the vegetable with the mustard, pepper, nutmeg, and sugar. Stir in the oatmeal. Bring the kale mixture to a boil, turn the heat back and let it simmer for 50 minutes. Stir from time to time and if necessary, fill up with a little water. The stew should be moist but not soupy. 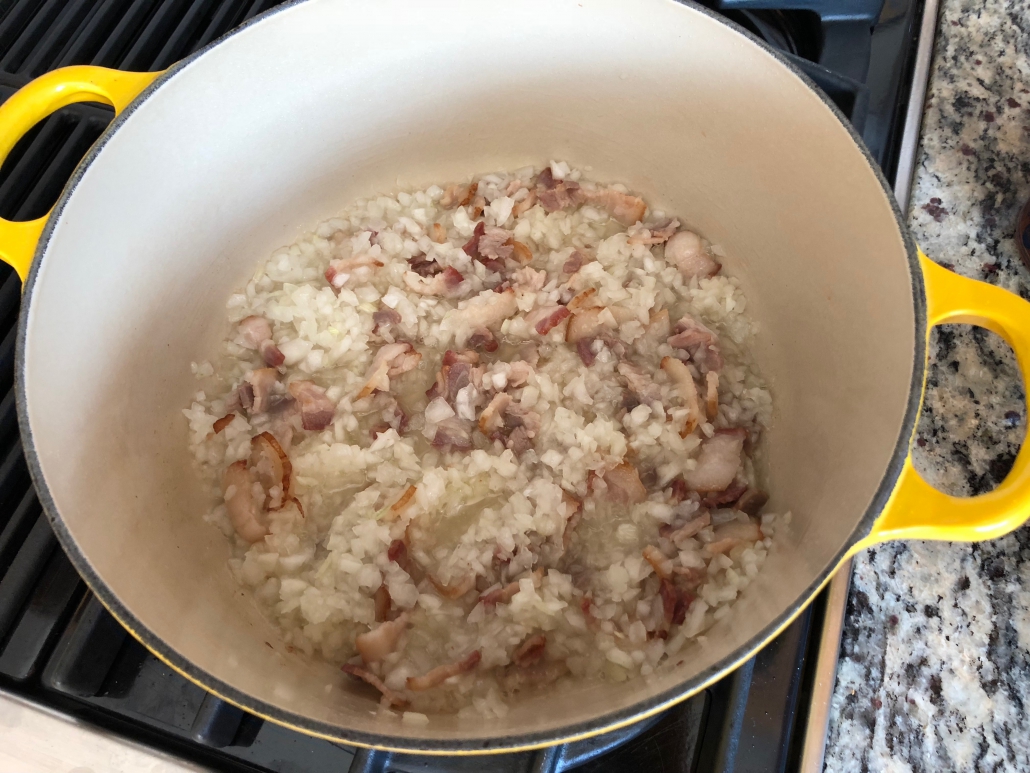 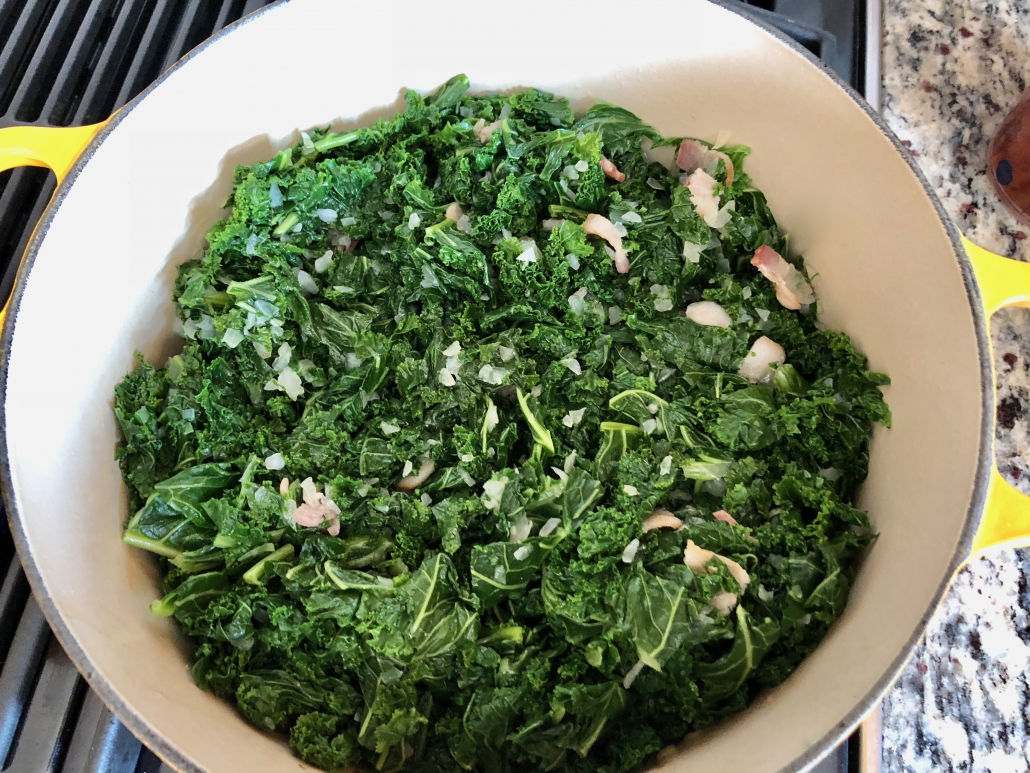 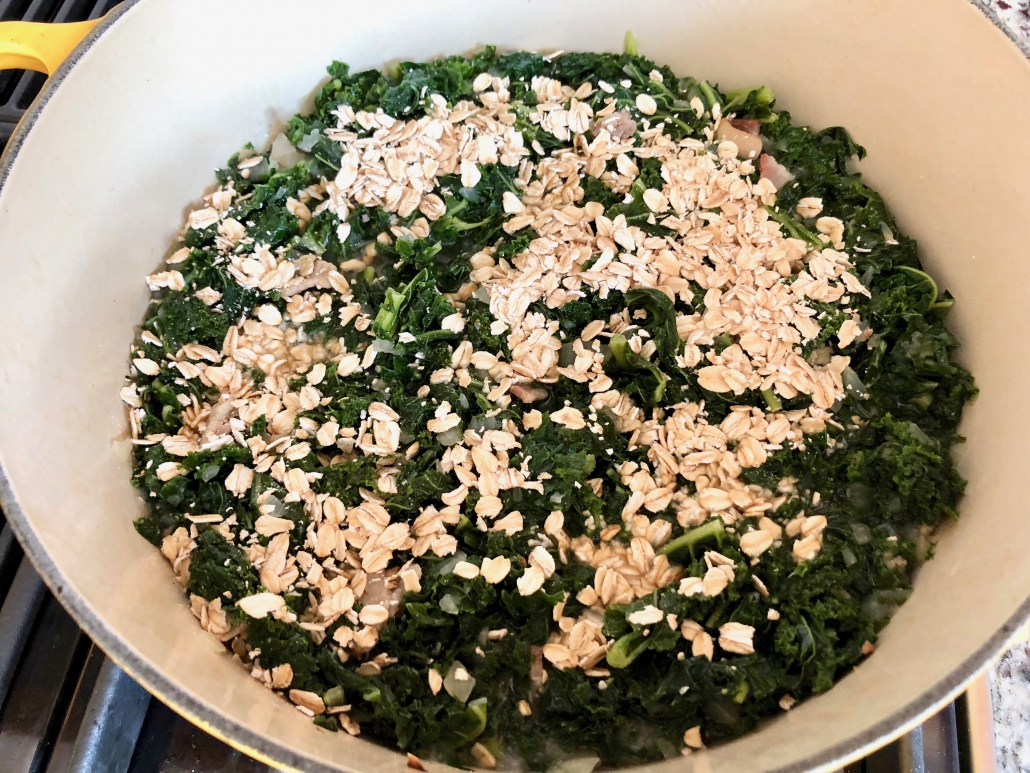 Add the ham and the sausages to the kale. The ham should be below the sausages to avoid that it dries out. Bring the kale stew to a boil again, reduce the heat and let it simmer for 18 – 20 minutes. 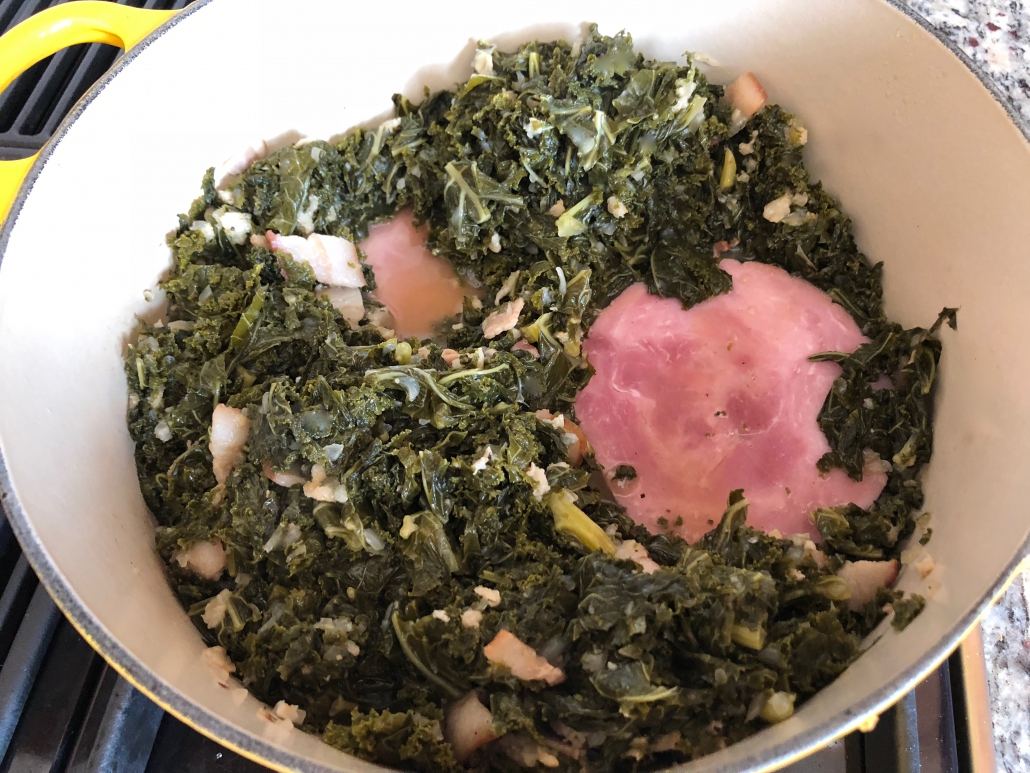 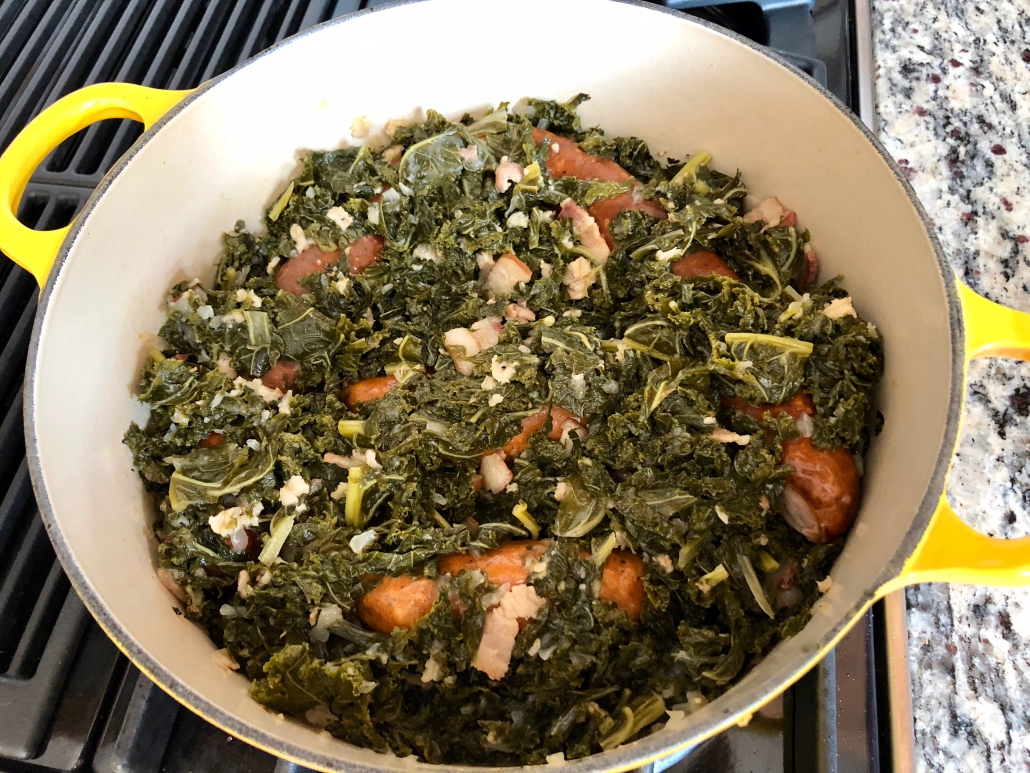 I like to serve the Grünkohl mit Pinkel with caramelized potatoes. Boil about 2 pounds of small potatoes (I used the small red once) for 15 minutes. Place in a colander, rinse with cold water and peel.

Melt two tablespoons of butter in a frying pan. Add 6 tablespoons of brown sugar to it and stir until the sugar is dissolved. Roll the potatoes in the sweetened butter and roast until golden brown.

Another nice side dish is the sweet and sour pickled butternut squash. Find the recipe here. To try the Hotchpotch Recipe Brisket Cabbage click here.