Rinse the meat and dry it with paper kitchen towels. Remove the fat with a sharp knife. Cut the meat in two steps. First, make a cut about ¼ of an inch wide, but not all the way through the bottom. Make a second cut about ¼ of an inch wide which goes all the way through to the bottom. This is your first slice. Continue cutting until all your meat has been sliced.

Open each slice of meat (each Schnitzel) that should look like a butterfly. The side which is cut should be facing the surface (see picture below). Use a meat tenderizer to flatten the meat. Turn the piece around. Sprinkle salt and pepper on both sides. 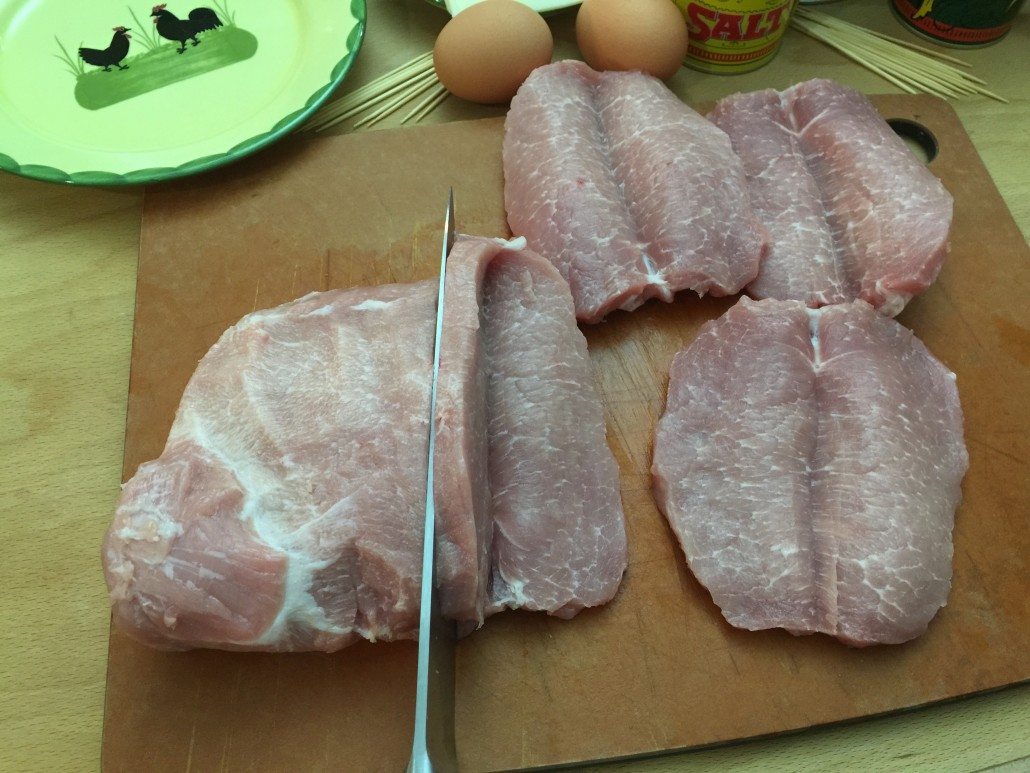 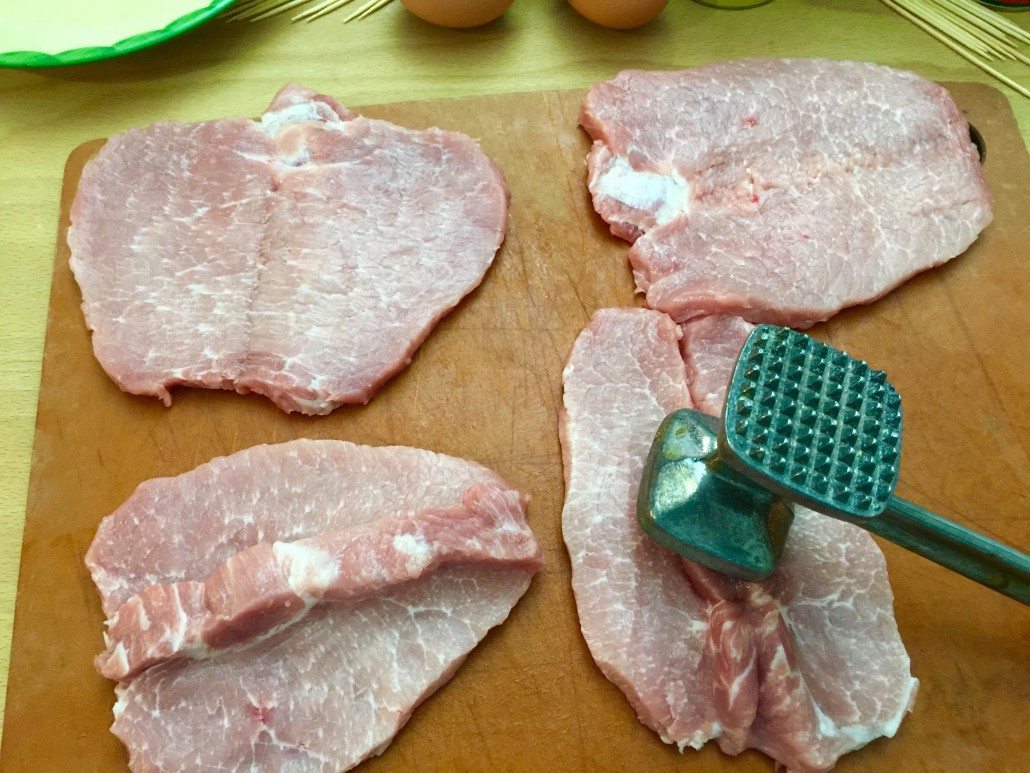 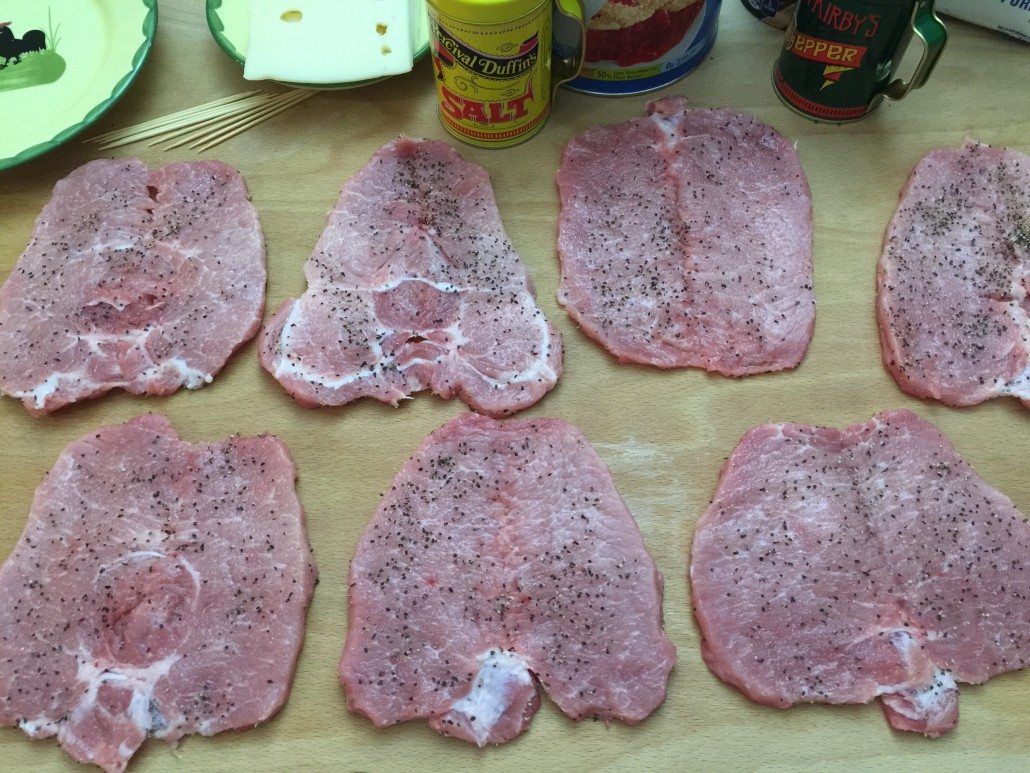 Place a slice of cheese on each piece of cooked ham. Fold the ham/cheese slices in half and place the folded slice on top of each piece of meat covering only half your Schnitzel. Make sure the edges of your folded slice points towards the center of your meat slice. Otherwise the cheese may seep run during the cooking process. Fold the other half of the meat over and close the Schnitzel with a skewer (see picture below). 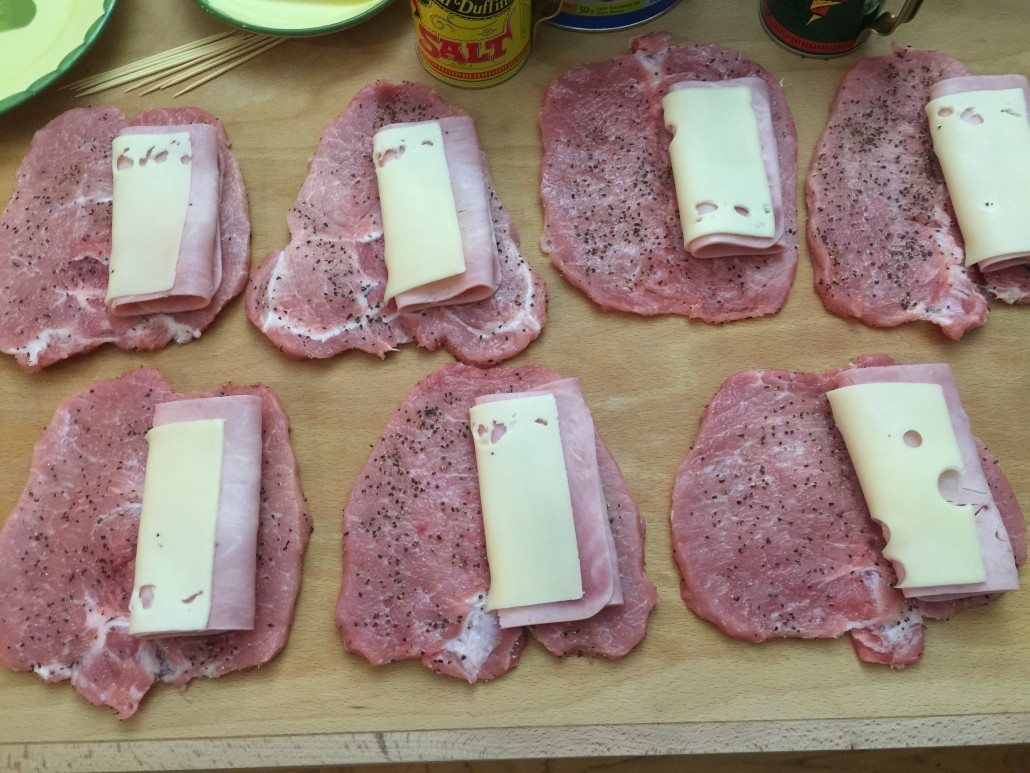 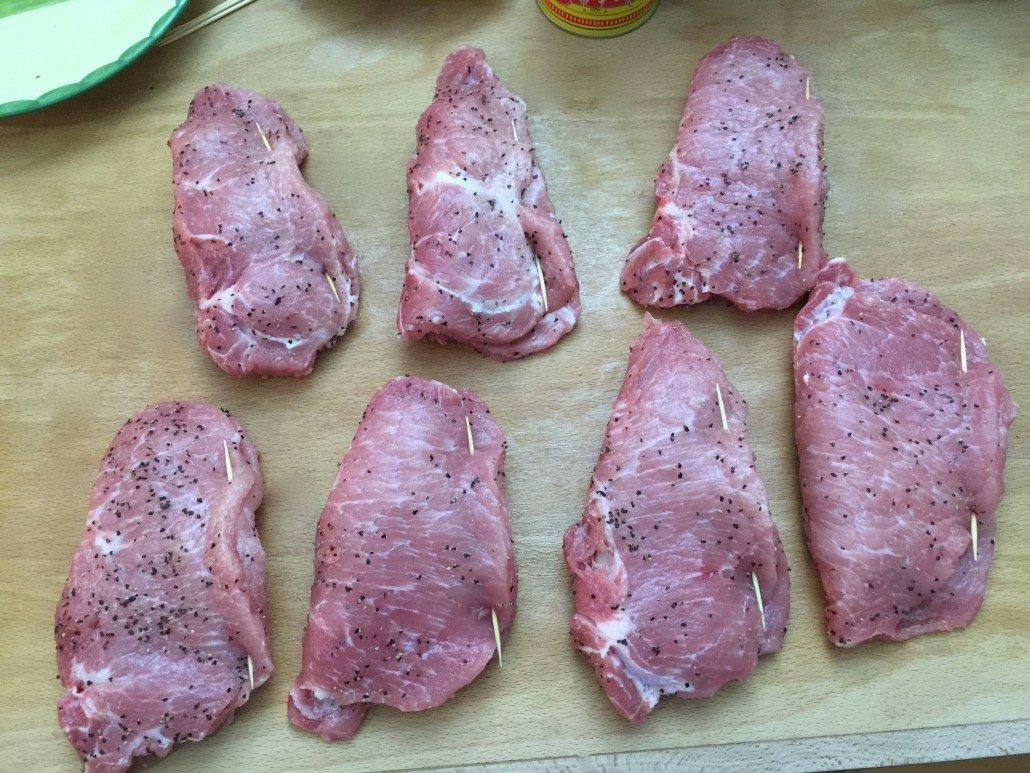 Start preparing the breading mix by mixing the flour with some salt and pepper and pour it on a plate. On a separate plate, beat the eggs with a fork. Spread the breadcrumbs on a third plate and have a fourth plate ready for the finished prepared Cordon Bleu.

Step 1: Roll the Cordon Bleu in flour. Step 2: Dip it in the eggs. Step 3: Coat the meat with breadcrumbs. Make sure the meat is covered evenly during each step. 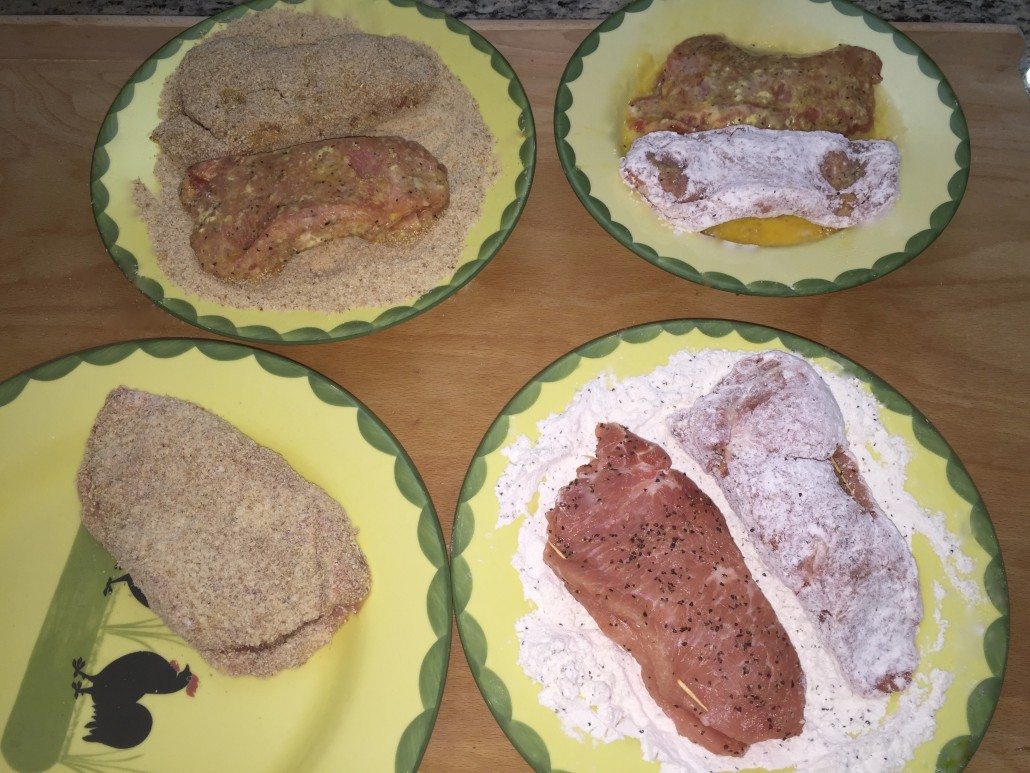 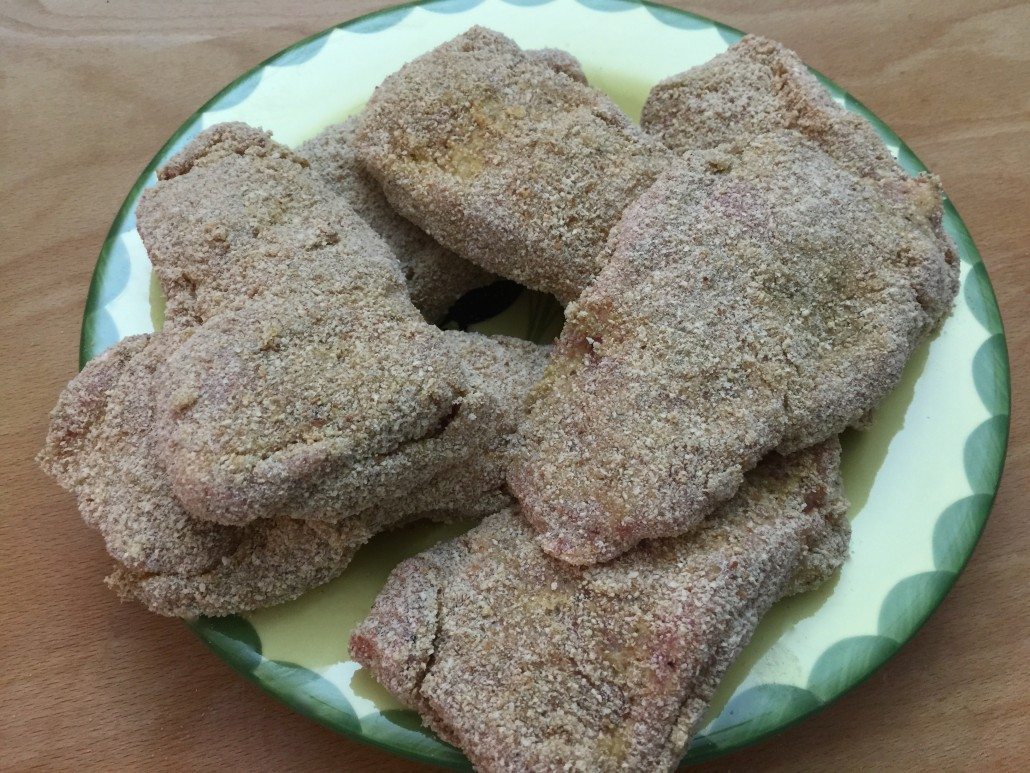 Heat the shortening in a frying pan. The bottom of your pan should be completely covered with shortening. The breading of the schnitzel will absorb a lot of the liquefied fat, so make sure to have additional shortening close at hand if you need to add shortening. Fry the Schnitzels slowly for about 6 minutes on each side while turning them over a few times. When the Schnitzels are done, place them on a cooling rack covered with paper kitchen towels. Once the excess oil has absorbed in the paper towel, place the Schnitzels in the oven (on low heat) to keep warm while you fry the rest of your Schnitzels. 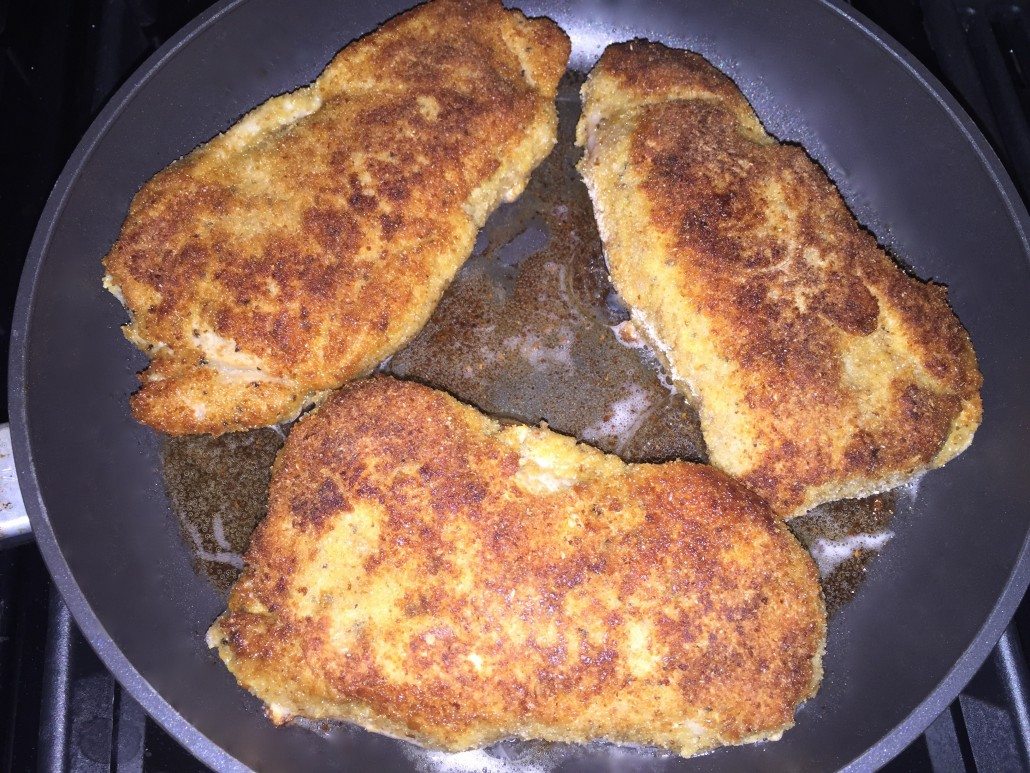 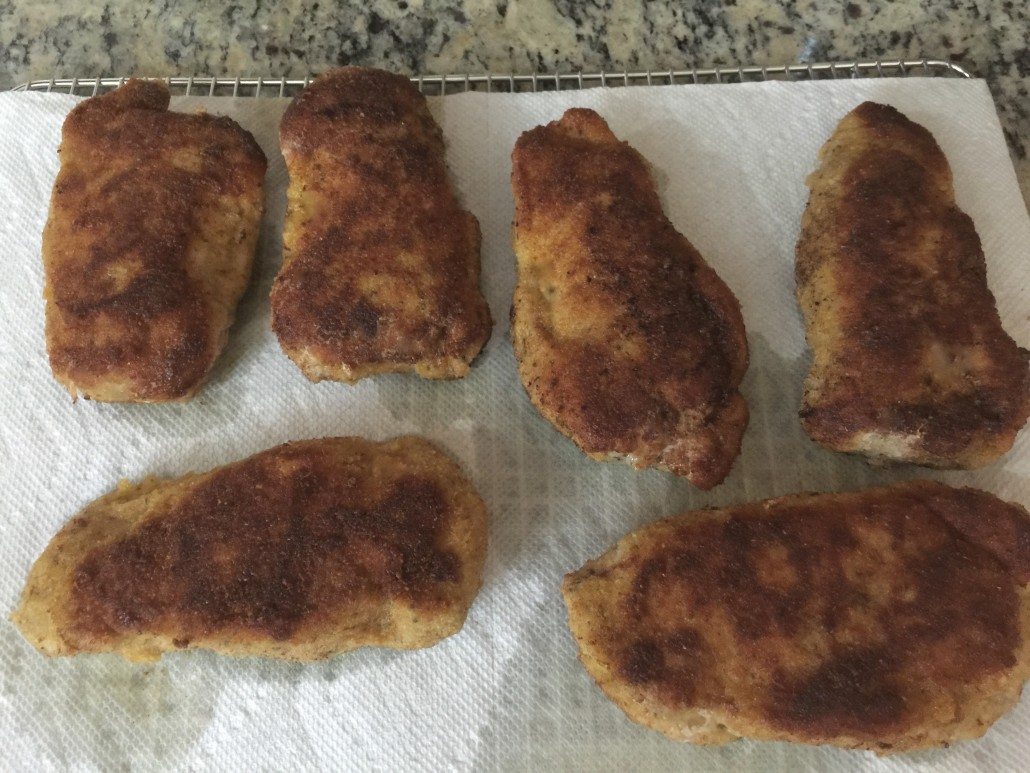 You can serve the Cordon Bleu with a few dashes of lemon juice on the top. The Schnitzels can be complimented by sautéed potatoes (see below).  Add one of Oma’s Salads from her Salad Bar and your meal is complete. To try the Classic German Jaeger Schnitzel Recipe click here and the Grilled Pork Loin Chops click here.

Boil small potatoes (I used fingerlings) for about 12 minutes. Put them in a colander and rinse under cold water. Peel the skin off. Melt about 4 tablespoons of butter in a skillet. Place the potatoes in the butter and sauté them evenly on all sides before placing them on a serving plate.

German Savoy Cabbage – Wirsing
Scroll to top
error: Content Is Protected By The US Copyright Act.